There are some crazy emails out there saying insane things about Senator Obama such as the title of this post.  I’ve even seen a video of Senator Obama not putting his hand over his heart during the national anthem.  Well, I know there are a few occasions where I’ve forgotten to do it.  Apparently one occasion for Senator Obama was caught on video and this video is being used as “evidence” he never does it.

Ooooo!  Well Oliver Willis puts the “hand over the heart” nonsense to bed in his post “Barack Obama and the Pledge of Allegiance”. In his post he has not one but two videos of Senator Obama saying the pledge and putting his hand over his heart. I feel so silly having to address such ridiculous allegations. By the way he’s a Christian and will put his hand on the Bible when he is inaugurated. To quote me when I was a kid, DUH!

UPDATE: When I wrote this little did I know that Hillary was going to join in on the smear campaign. Absolutely disgusting.

UPDATE 2: Apparently Representative Jack Kingston from Georgia joined in on the Obama smear campaign on Bill Maher’s show on Friday. An audience member was so pissed he responded on YouTube. Here’s the Bill Maher clip and the audience member’s response:

UPDATE 3: It is clear in this photo that former President George H. W. Bush refuses to put his hand on his heart and say the pledge!  Why does Bush hate America?!?!  😉 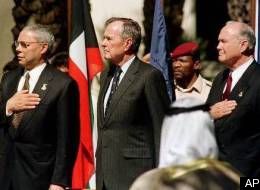 This entry was posted in Politics and tagged clinton, obama, Pre-2016 Format.

5 thoughts on “Obama: the flag hating, pledge not saying, Muslim”

THANK YOU FOR STANDING UP TO RIGHT WING LIES. I HAVE SEEN THIS PCITURE CIRCULATED ALONG WITH CLAIMS HE IS MOSLEM AND PEOPLE ACTAULLY BUY IT! HOW SAD. CAN WE ALL GROW UP AND JUDGE EACH CANDIDIATE ON MERIT NOT INUENDOS.

Thanks for posting my video mate!

I believe (technically), you’re supposed to put your hand over your heart for the pledge of allegiance, and simply sing along with our national anthem. Barocks!

Look,
the photo of him standing without his hand on his heart…is Obama STANDING for the National Anthem. You know, like a good patriotic American. I guess I shouldn’t be surprised that the Swift Boat bullshit has started so early.
Anybody want to post something substantive…well, that would be so different.