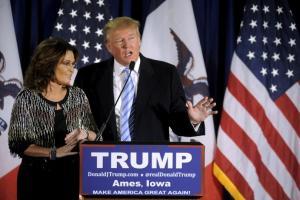 Palin would fit right in to the George W. Bush administration. AP has the story.

ANCHORAGE, Alaska (AP) — Gov. Sarah Palin’s signature accomplishment — a contract to build a 1,715-mile pipeline to bring natural gas from Alaska to the Lower 48 — emerged from a flawed bidding process that narrowed the field to a company with ties to her administration, an Associated Press investigation shows.

Despite Palin’s boast of a smart and fair bidding process, the AP found that her team crafted terms that favored only a few independent pipeline companies and ultimately benefited the winner, TransCanada Corp.

What the Palin administration didn’t tell legislators — and neglected to mention in its announcement of Rutherford’s appointment — was that in 2003, Rutherford left public service and worked for 10 months at the Anchorage-based Jade North lobbying firm. There she did $40,200 worth of work for Foothills Pipe Lines Alaska, Inc., a subsidiary of TransCanada.

TransCanada also had a connection to the team hired by the Palin administration to analyze the bid. Patrick Anderson, a former TransCanada executive, served as an outside consultant and ultimately helped the state conclude that TransCanada’s technical solution for shipping gas through freezing temperatures would work.

“Most definitely TransCanada got a sweetheart deal this time,” said Republican Sen. Bert Stedman, who voted against the TransCanada license. “Where else could you get a $500 million reimbursement when you don’t even have the financing to build the pipeline?”

Apparently Palin is as dirty as the rest of them. Reformer? Maverick? I don’t think so.

This entry was posted in Politics and tagged mccain, obama, Palin, Pre-2016 Format.