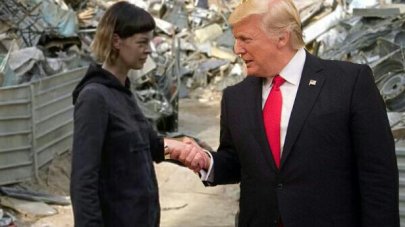 (FNN) – Today Trump met with Jadis, leader of the garbage pail kids, and finalized a deal that will more than double the size of The Trump Organization. Ever since Trump’s efforts as president to create the ultimate chemical weapon turned most of the country into the walking dead, Trump has been attempting to find a way to defeat The Saviors and take over Alexandria so he and his extended family can live there in peace and prosperity.

After the meeting, Trump addressed his followers and stated, “This meeting was huge. It was the best meeting filled with the best people. With the support of these fantastic garbage pail kids, I’m declaring war against The Saviors and demanding the people of Alexandria leave their community in the next twelve hours or they will be met with fire, fury, and frankly power the likes of which this world has never seen before.”

Soon after, Rick Grimes, the off again on again leader of Alexandria, called for a meeting at the church. There he discussed Alexandria’s options with the residents.

“We have to come for them…before they come for us. Do they really think they’re gonna take this community from us. From Michonne? From Daryl? From me? From Carl…Caarl! They’re gonna feel really stupid when they find out they are screwing with the wrong people.”

At this same moment in a nearby town Negan called a meeting of The Saviors.

“Trump’s got some beach ball-size lady-nuts on him, talking all kamikaze like that. Well, Lucille is thirsty. She is a vampire bat! I’m gonna pop Trump’s skull so hard his eyeballs’ll pop out, and that shit is gross. Pissing your pants yet Donnie boy? It’s gonna be pee-pee pants city real soon but I expect you’d like that. Donnie boy, you got no guts. Saviors, we are going to war!”

We’ve reached out to the Wolves for comment but as of yet there’s been no response.

This entry was posted in Politics and tagged comedy, Humor, Parody, Satire, We Are The Walking Dead.